Moon Shroom Microdose Neuro Blend is an immunity and mild FOCUS blend of  mushroom capsules. Neuro Blend is a Psilocybin based supplement that provides users all of the benefits of Psilocybin, without experiencing the overwhelming psychedelic effects.

Neuro Blend works by imitating serotonin by stimulating the 5-HT2A receptor located in the frontal cortex. Stimulation of the 5-HT2A receptor causes two significant things to happen in the brain. One, it leads to production of BDNF (Brain Derived Neurotrophic Factor) which stimulates growth, connections and activity in different parts of the brain. Two, it increases the transmission of Glutamate, which is the neurotransmitter responsible for brain functions such as cognition, learning and memory. New neuro pathways in the brain are said to be created.

Scientists are calling micro dosing “the next quantum leap in human consciousness.”

Suggested  dosing protocol of five days on, two days off, so one does not build up a tolerance. A traditional mushroom micro dosing protocol is one day on, 2 days off. Take with Food.

Moon Shroom Neuro Blend has 80 milligrams of Psilocybe Cyanescens and a combination blend (200mg)of Lion’s Mane Mushroom, (150mg)  Chaga Mushroom, (150mg) Reishi Mushroom and (40mg) Niacinamide. This Mushroom stack will give users a sense of clarity, creativity, focus and mood elevation. Users will also experience a reduction in anxiety and depression, along with helping reduce the effects of numerous other unwanted mental states. 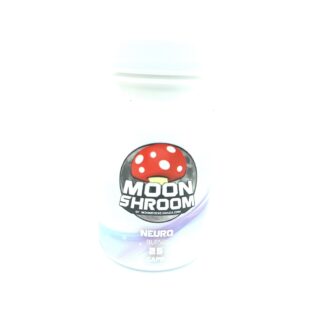